Your Life Will Be Sublime 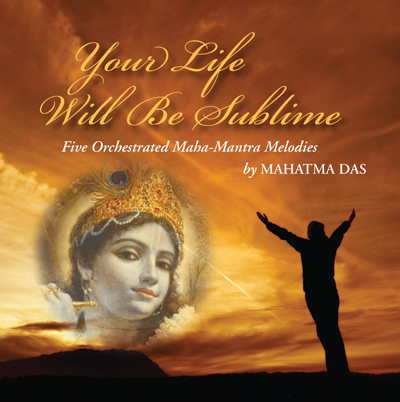 “When I became a devotee in 1970, I donated my guitar to the temple and resigned to give up my long cherished desire to write songs, play in a band, and spend endless hours in a recording studio producing records (my other guitar, which would be a bit of a collector’s item today, was stolen a few months before I joined the temple). I thought I had buried these ambitions forever until one day in 1986, a synthesizer and 8-track recorder landed in my lap. Not only that, a devotee recorder engineer and a devotee who purchased one of the first drum machines on the market were both ready and willing to help me produce my first album.

For years I thought it would be wonderful to record the maha-mantra with music that is attractive to the western mind. I sensed that this would get more people to chant. I visualized the music to be like a frame, something to enhance the beauty and attraction of the maha mantra.

With this in mind I decided to take advantage of this equipment. I had been performing “westernized kirtans” live at public places for the past few years, so I had plenty of material to record.

This was the first “official” recording I made as a devotee. It was unique at the time since other than Krsna Prema Prabhu, no one had recorded kirtans or bhajans using synthesizers and drum machines.

I intended this project to be solely for non-devotees. Many temple guests would tell me how the music really got them to into the chanting, so I was satisfied that it’s purpose was served. But something unforeseen happened: all kinds of devotees were telling me how much they liked it (I couldn’t control who purchased it). I was thinking to myself, ‘But I didn’t produce this for you, you are not supposed to like it. This is not traditional kirtan. This is just to get non-devotees into the chanting.’

This response came as a total surprise to me (even senior devotees and leaders told me they listened to my recordings). Originally, I had no plans to record anything after this, but because so many devotees encouraged me, I decided to make recording one of my regular services.

This is a simple production, but the bliss I and the other devotees who chanted with me were experiencing comes through the recording.

I produced many recordings after this, but one of my favorite songs remains the fourth song on this project. This is an Indian raga that takes on a special quality by adding chords (chords are not used in traditional Indian music). The best way to describe this kirtan is that it’s halfway between the East and the West. This blend gives it a unique quality.

I played the keyboard, a Roland Juno 6 (I think) loaned to by Parikit Prabhu, a great devotee musician (expert in classical and rock guitar and sitar). The 8-track recorder was loaned to me by Jessie Horner, Parikit’s roommate when they both were attending UCSD. Yogananda played and programmed the drum machine (this was all new stuff in 1986) and Jayatu, a former recording engineer, recorded and mixed the project.”