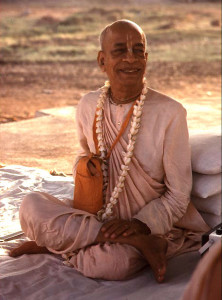 His Divine Grace Abhay Charanaravinda Bhaktivedanta Swami Srila Prabhupada (1 September 1896 – 14 November 1977) was a Gaudiya Vaishnava teacher and the founder-acharya of the International Society for Krishna Consciousness (ISKCON), widely known as the “Hare Krishna Movement”. His mission was to propagate Gaudiya Vaishnavism. His guru was H H  Bhaktisiddhanta Sarasvati Thakur. Born Abhay Charan De in Calcutta,India, he was educated at the prestigious local Scottish Church College. Before adopting the life of a pious renunciant (vanaprastha) in 1950, he was married with children and owned a small pharmaceutical business. In 1959 he took a vow of renunciation (sannyasa) and started writing commentaries on Vaishnava scriptures.

In his later years, as a traveling Vaishnava monk, he became an influential communicator of Gaudiya Vaishnava theology to India and specifically to the West through his leadership of the International Society for Krishna Consciousness (ISKCON), founded in 1966. As the founder of ISKCON, he “emerged as a major figure of the Western counterculture, initiating thousands of young Americans. Despite attacks from anti-cult groups, he received a favorable welcome from many religious scholars, such as J. Stillson Judah, Harvey Cox, Larry Shinn and Thomas Hopkins, who praised Bhaktivedanta Swami’s translations and defended the group against distorted media images and misinterpretations. In respect to his achievements, religious leaders from other Gaudiya Vaishnava movements have also given him credit.