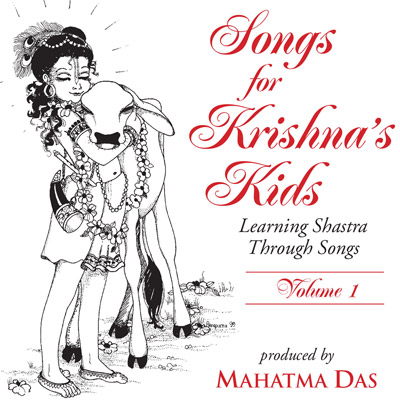 Lyrics of all the songs in this album

“While Arci devi dasi was working at the Back To Godhead mail order department, parents would regularly inquire from her about new material for kids. So she asked me if I could produce songs for children and she gave me a few ideas. I told her I would and that I had been thinking about this for years.

While on a trip to Texas, my wife Jahnava and I further discussed the project with Tapasvini, the then head of the temple children’s school in Houston. She gave us the idea to use music to teach sastra. I immediately appreciated the idea and knew it would be a fun and easy way for our children to learn the scriptures, both in Sanskrit and English.

After returning from Texas, I discussed the project with Krsna Kanti Prabhu, a professional recording engineer who had done a similar project for a Christian group. He gave me useful information that I put into practice. Shortly after, I recorded the first song, The Twenty-six Qualities of a Devotee, with the Los Angeles temple school students. We did this as a test run. The children and parents loved it, so we knew we were on the right track.

Just after this, I went to Vrndavana for three months. While there I wrote another seven children’s songs. After returning, I relocated in Dallas, upgraded my studio, arranged the music for the songs with the help of Krsna Caitanya and recorded the vocals with the help of my wife, several devotee singers, and the Dallas temple school students

When the original recording went all over the world in the late 90’s, something interesting happened: moms loved them as well. So, although this was intended for kids (we went out of our way to have kids sing), devotees of all ages can enjoy the songs. And the benefit of listening is that you automatically memorize sastra, bhajans and prayers.”