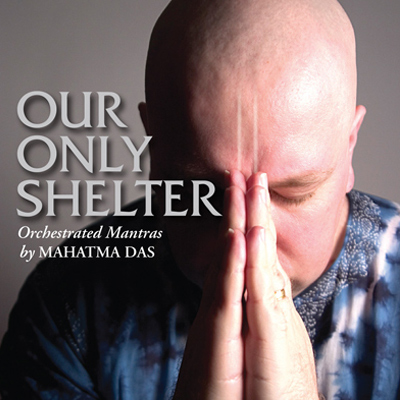 Original and traditional melodies for the maha-mantra and other prayers sung by Mahatma das and accompanied by mellow westernized contemporary orchestration.

“In the late 80’s major breakthroughs were being made in music technology. Synthesizers were able to play sounds of real instruments and be controlled and manipulated by computers in ways only previously imagined. At the same time, multi-track recorders were becoming commonplace. These breakthroughs became impossible for me to ignore, and I bit the bullet and invested in some synthesizers, a computer, music software and an 8-track recorder.

Since this was just the beginning of the era of computers controlling synthesizers, there were all kinds of bugs to workout. As we set up our studio, we spent endless hours getting everything to work. We even had to buy a second computer to run a new software program because we ran into so many glitches with the original software we were using. It’s was both agony and ecstasy. The ecstasy was that we could do things never before possible. Now from our studio we could create multi-track orchestrations to frame the maha-mantra. But the agony was getting everything to work. It was common for us to spend hours on the phone talking to technicians helping us troubleshoot. It got so bad that on many occasions Krsna Caitanya wanted to quit (along with chanting the maha-mantra, we often chanted the mantra, “stupid computer”). But we persisted, finally worked out the kinks, and in the end were able to produce a nice recording.

Having a full orchestra play the backing for a kirtan had long intrigued me. Now I had a shot at it, albeit without a real orchestra. The orchestrations are quite simple, but they add the mood I wanted to create.

On the third song, the Prayers of King Kulasekhara, I use the same melody Srila Prabhupada used to chant this song. The kirtan following this prayer is one of my all-time favorites. While chanting, I tried to enter the mood of King Kulasekhara who was praying to remember Krsna at the time of death.

Surprisingly, many mothers have told me how much their children love this recording and how it calms them down (it is very mellow). In fact, several mothers told me that they use this recording to put their kids to sleep at night.”
Prayers to King Kulasekhara

“My Lord Krishna, I pray that the swan of my mind may immediately sink down to the stems of the lotus feet of Your Lordship and be locked in their network; otherwise at the time of my final breath, when my throat is choked up with cough, how will it be possible to think of You?”