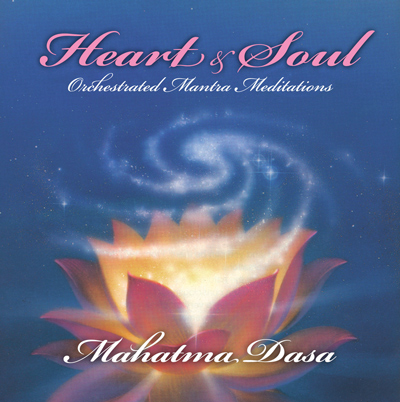 Four original soothing westernized melodies for the maha mantra and other prayers accompanied by contemporary orchestration and sung by Mahatma das.

“After the release of Our Only Shelter in 1989, I had been doing a lot of live kirtan with a synthesizer and drum machine and had come up new material. So I was anxious to record another CD. I had the opportunity to connect with Krsna Caitanya Prabhu as both of us were on the East Coast (the producer of Our Only Shelter) and asked if he would help me produce this CD. He was the engineer behind Our Only Shelter and I didn’t feel I could produce anything without him.

With his help, and the help of Bhakta Mike, one of the Krsnafest musicians, we squeezed ten days from our schedules to put this CD together. My intention was to make something both for devotees and the New Age market, as New Age music was popular at that time (and still is). So the music is especially mellow and relaxing.

We took the music we had generated and brought it to a local studio where I sang the vocals. This was the first CD I recorded without any background singers, not because I wanted to but because I didn’t have the time to arrange for singers (it takes time to find good devotee singers, get them in the studio and record them).

While working on the project, the engineer would tell us, “‘He Govinda” keeps going through my head (that’s a line I added to Govinda Jaya Jaya).” If after listening to Heart and Soul for a few days, “He Govinda” continually goes through your head, I will consider this project a success.”